On every good episode of CSI/NCIS/Criminal Minds or any other of your favourite investigative shows, you’ll probably hear reference being made to using DNA results to nail the suspect. Similarly, Maury Povich has popularized DNA testing in his slew of (non)couples trying to figure out paternity through DNA results. The idea of DNA technology is definitely no longer a new phenomenon, but how many of us really know what DNA actually is?

Well, for February we’re going to be focusing on DNA. YAY! (Hope you enjoyed the microbe series last month; if you missed it, take a read. So a good place to start would be talking about what this mysterious DNA thing is, and what does it really do.

The name DNA stands for deoxyribonucleic acid, and DNA is a molecule that exists in every single cell in our bodies that carries the code for our genetic information. It’s basically the blueprint that has all the information about everything going on in our bodies.

The basic building block of DNA is called a nucleotide. Each nucleotide (or block) consists of three parts: a sugar (ribose), a phosphate group, and the most important part, a BASE PAIR (but more on that in a few).

These nucleotide blocks then bond to each other to form a long chain called a DNA strand, and these strands link together to form a double-helix, which is the picture of DNA that we’re all familiar with. 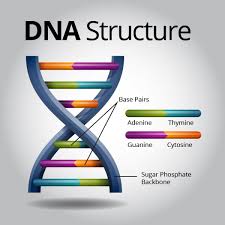 The really important guys on the DNA molecules are the nucleobases (which are just nitrogenous compounds). There are four bases generally found in DNA molecules: adenine, guanine, thymine, and cytosine, coded for by A, G, T and C. These guys are friendly too; the bases on one strand of DNA are able to bind with the bases on the other to form base pairs: A binds to T and G binds to C. It’s actually the marriage between these bases that brings the two DNA strands together to form the double helix.

How the Blueprint Works

Anyway on to the fun stuff. What does all this talk about nucleotides and base pairs have to do with how I look, or who my parents are?

Welllllll base pairs are pretty much the language of DNA, so combinations of these letters are actually what makes up the DNA code. For example the code for your eye colour might look something like this ATCGATTGAGCTCTAGCG (well not really but you get the idea). Remember how we said that DNA is like a blueprint? Well every single characteristic you have, from the enzymes in your stomach to your hair colour, to your blood type, is coded for by a gene or combination of genes. And these genes work by producing proteins, which basically make everything up in your body.

DNA provides the raw material for your body to work with:

[This flow from DNA to protein in the cell is known as the Central Dogma of Genetics. Fancy huh? Yea I know.]

Every single cell in your body contains a complete copy of your DNA, which is the info for ALL your genes (known as your genome). However, special regulators in your cells choose which genes to activate depending on where in the body the cell is.

What Makes You You

I’m sure you’ve heard the concept that no two persons have the same DNA (well except identical twins); that’s why DNA is used to distinguish paternity or to eliminate suspects in investigations. But let me blow your mind for a second.

99.9%, we are ALL THE SAME DNA-wise. Yep, that’s right. There’s only 0.1% of our DNA that differs from person to person. But here’s the crazy part. That 0.1% makes up over 3 million differences between your DNA and anyone else’s.  That can give you some perspective as to just how much information is really kept in these tiny molecules floating around everywhere in our bodies. [Also interesting to note, our genomes as humans are actually 99% similar to chimpanzees, so you probably have some cousins that are closer than you thought]

This 0.1% of your genome is what scientists and investigators use to identify just who you are. By testing this variable portion of your DNA, we can build a DNA profile that represents you, and you alone. Then these DNA profiles can be compared to figure out how much similarity there is between them. Unless you’re an identical twin (or triplet or quadruplet or sextuplet), there is no one else on the planet whose bases will have the exact same code as you, and no one else whose genes will be arranged in the exact same way as yours.

[QUICK ACTIVITY: Can you figure out which child(ren) doesn’t belong from the picture of the DNA profiles below? Hint: Check out the colours. Answer next week]

Our genomes are different because of mutations, which are “mistakes” that occur occasionally in a DNA sequence. When a mutation occurs in a sex cell—a sperm or an egg—it can be passed along to the next generation of people. So when your parents were busy making you, your genome probably ended up with about 100 “new” mutations which are uniquely yours. Combine these with all the other mutations from every single generation before you, and you’ll find that no one else will have the exact same combination of mutations that you have.

So the next time you feel like you’re fading into the crowd or not fitting in, just remember there are over 3 million reasons that no one can ever be you! Stay tuned for next week when we explore more on genes and chromosomes and look at what happens when something gets a little too unique with one of these variations.

2 thoughts on “DNA: Your Blueprint”