Happy New Year to all!

[So I’ve noticed in most conversations with my non-microbiologist friends, from the look on their faces when I tell them I work with bacteria, most people see bacteria as icky, nasty, dirty things. While an understandable misconception, it is certainly a very unfair one.] 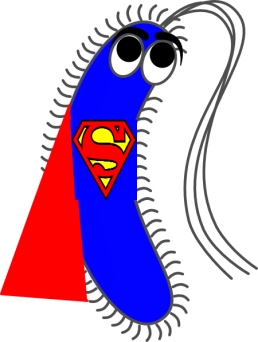 The truth is we are covered in bacteria, inside and out, and most of the things around us are too. The bacteria cells in our body outnumber human cells 10 to 1, so we’re basically more bacteria than human. It’s important to understand what bacteria do, and roles they play, so check out some of these useful bacteria and what they do.

These bad boys, as their name suggest, are lactic-acid bacteria, meaning they turn the sugar that’s in whatever’s around them into lactic acid. (I won’t get into the biochemistry of all those cycles but that’s pretty important, take my word for it.) They’re extremely common within the body (ladies, you’ll have plenty intimate experience with this one). But Lactobacilli are important because they’re commonly known as probiotics. Probiotics just basically refers to bacterias and yeasts that are good for your body. You usually see them added to yogurt, but Lactobacilli in particular have helpful effects as an antifungal, as they produce hydrogen peroxide that kill Candida albicans (yeast infection) species.

These guys are just the sweetest. They cohabite our digestive tract happily, don’t cause any trouble and can help with your general digestive health. Another probiotic commonly added to food, Bifidobacteria are especially common in breastmilk, which is where they were first isolated.

These are another example of lactic-acid bacteria, but this species is particular useful in providing relief for lactose-intolerant persons by breaking down the lactose in milk to make it easier to digest. S. thermophilus have also shown to reduce the risks of AAD (antibiotic-associated diarrhoea), an issue that sometimes occurs after taking antibiotics.

Yes recognize these guys? Well, not only are they good for your body, they’re incredibly handy in the fermentation industry. See, the lactic acid that they produce is essential to the making of some foods such as yogurt, cheese, pickles and sauerkraut. They also frequent the brewery industry, in the production of some beers and ciders.

Back again. Streptococcus thermophilus is also a lactic acid bacteria, so again useful in the fermentation business. It’s often used as a starter culture for making yogurt, mozzarella cheese and other fermented dairy products

Affectionately called BT, Bacillus thurigiensis is usually found in soil, but is especially important because they produce a special protein that works as an insecticide. Basically, when the insect eats a plant or something with the bacteria, it also takes in all the poisonous proteins that come with it. The toxins basically form crystals which drill a hole in the intestine of the insect causing everything inside the guts to spill out into the rest of the insect until it dies. Quite dramatic, isn’t it. Anyway, scientists are now genetically engineering crops to contain the BT toxins already built in, ready for the brave caterpillar who dares to chow down. And there’s a lot more work being done on the potential of these bacteria in widespread agricultural use, so stay tuned for that one.

If it’s any bacteria you might have heard of, it’s E. coli. Truthfully, you may have only heard of it in cases of restaurant food poisoning and lawsuits, but E. coli is just one of those staple bacteria for us nerds. It’s easy to grow, hardy, and it’s just so damn useful. E. coli is what you call a model organism, they behave pretty much as you expect them to. So it’s easy to manipulate into doing what you want. E. coli is the bacteria they use to produce insulin to be used for diabetic patients, E. coli is the bacteria that produces Vitamin B to be processed and used in supplements. E. coli is so easy to modify that it’s been used in the development of basically everything – vaccines, biofuels, lighting, bioremediation, enzymes. This unsung hero of microbiology is naturally found within our body, especially along our digestive tract. Despite their unmistakable smell of bad breath, E. coli has revolutionized the scientific world as the first bacteria to have its genome sequenced….and then it revolutionized so many industries.

One thought on “The Good Guys: Useful Bacteria”